Making homemade window cleaner is an easy way to save money and protect the environment. It is simple to make from substances that are common to nearly every home and is a nontoxic solution to your cleaning needs.

Many people have never even considered making their own glass and window cleaners. It is very convenient to run to the store and pick up a bottle of cleaner when necessary. It's not uncommon for people to believe if it isn't bright blue then it certainly can't clean a window properly.

Recently though, more and more consumers are concerned with the environmental impact of modern conveniences. From the plastic bottles that the cleaners come in to the fuel used to transport it, conventional glass cleaners have a carbon footprint the size of Alaska. The chemicals used are harsh and often dangerous for children, and ultimately pollute the water system.

Homemade cleaners, on the other hand, are made from natural ingredients, including:

Ammonia is a substance that is produced naturally in the environment. It is found in:

It does not last long in the environment because it is absorbed as a nutrient by plants, bacteria, and animals. Because it is absorbed so quickly it does not build up to toxic levels. Therefore it is safe to use ammonia as directed. Never combine chlorine bleach and ammonia, vinegar, or any other acid because the fumes can be deadly.

Recipes for Vinegar Based Glass Cleaners

Vinegar makes a good homemade window cleaner. It removes oil and grease from glass and other surfaces. It also keeps windows from fogging up. Either distilled white or cider vinegars can be used in the following recipes: 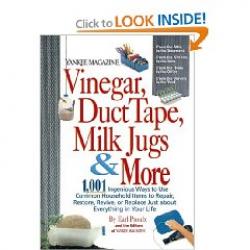 Rubbing alcohol makes a good glass cleaner because it evaporates quickly without streaking. It is inexpensive and can be used straight from the bottle or added to other substances. There are several recipes using rubbing alcohol as a base for glass cleaner such as:

Consider the following tips when using a homemade cleaner:

It can be hard to get into the habit of making your own cleaners. There are some differences in the homemade cleaners and you may need to try several recipes until you find one that works well for you. If you try a cleaner and end up with filmy or streaky windows try adding a little extra dish soap. Sometimes this small adjustment will make all the difference. Once you get used to using homemade cleaners you won't want to go back to anything else.