You might have seen commercials on the cleaning power of peroxide. But what is hydrogen peroxide? Hydrogen peroxide is created in the atmosphere when ultraviolet rays from the sun hit oxygen in the presence of moisture. When you look at its chemical makeup, it is pretty much water but has a fun little oxygen atom making it H2O2 rather than H2O. It's as strong as bleach but breaks down harmlessly. That means hydrogen peroxide packs a non-toxic one-two punch.

Hydrogen peroxide is a powerful disinfectant that will kill bacteria like staph and viruses like the H1N1 virus, SARS and coronavirus. This makes it a great disinfectant. To get the most disinfecting power, look for 3-6% hydrogen peroxide solution for making your all-purpose cleaner.

Where To Use Hydrogen Peroxide to Clean

Using peroxide is easy. You will need a spray bottle and hydrogen peroxide. That's it.

Use Caution With Continual Use on Countertops

The only caution that you'll need to take with hydrogen peroxide on hard surfaces is your countertops. If they are made of marble or granite, using hydrogen peroxide once in a while is okay but not for continual use. This is because it is slightly acidic and can break down the finish. Additionally, it does have bleaching agents and can cause discoloring. Therefore, you'll need to test it on a discrete area first if you have a colored surface.

To clean and disinfect your floors, you'll want to follow these steps.

It is important to remember that hydrogen peroxide has bleaching qualities. Therefore, you'll want to test it on colored and wood floors before using it.

In addition to spraying on surfaces, you can create a disinfecting soak of 3% hydrogen peroxide.

While hydrogen peroxide works great on its own, you can mix it with other household items to enhance it's cleaning power and give it a great scent. To make lemony fresh cleaners, you follow this recipe. 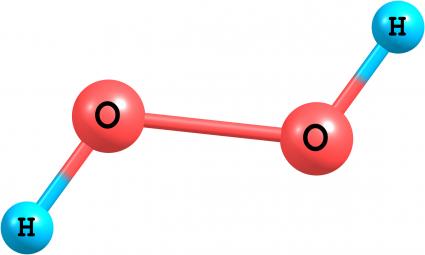 Not only does the lemon add a bit of fresh scent to the cleaner, but the acid in lemon can also help to break down scum and grim for bathtub or toilet cleaning.

Hydrogen peroxide isn't just for wiping down surfaces, you can use it on fabrics too. However, before you start spraying it on colored fabrics, which it can bleach, remember to test an area. Since you've been warned, you might try hydrogen peroxide to:

Is Hydrogen Peroxide Safe to Clean With?

Cleaning with hydrogen peroxide has several advantages. The most important one is that it is safe to clean with since it is a non-toxic substance. It won't hurt the environment, cause pollution, or create six-legged frogs, yet it is a strong disinfectant. Therefore, you can use it to clean your child's clothes and a dog's bed. So the clean surface that they touch will be safe from chemicals and germ-free.

Peroxide has a lot of cleaning and disinfecting benefits and is safe alone. However, it is important to be careful about what you mix peroxide with. For example, both peroxide and bleach along with peroxide and white vinegar should not be mixed together in the same bottle. This is due to the adverse reactions that the mixture creates. You can, however, use vinegar then follow up with peroxide for extra disinfecting action. For example, vinegar followed by peroxide can be a powerful germ-fighting duo for your sink or toilet.

The Germ-Fighting Power of Hydrogen Peroxide

Not only can hydrogen peroxide disinfect your thermometers, but it can clean and whiten your laundry. So when the sniffles attack, you know to look in your bathroom to find the perfect natural cleaner.